Why is everyone trying to ruin my commute?

Rants about cyclists, sweaty tube carriages and oblivious pedestrians are easy to orchestrate. But here's the reality few Londoners are willing to acknowledge... 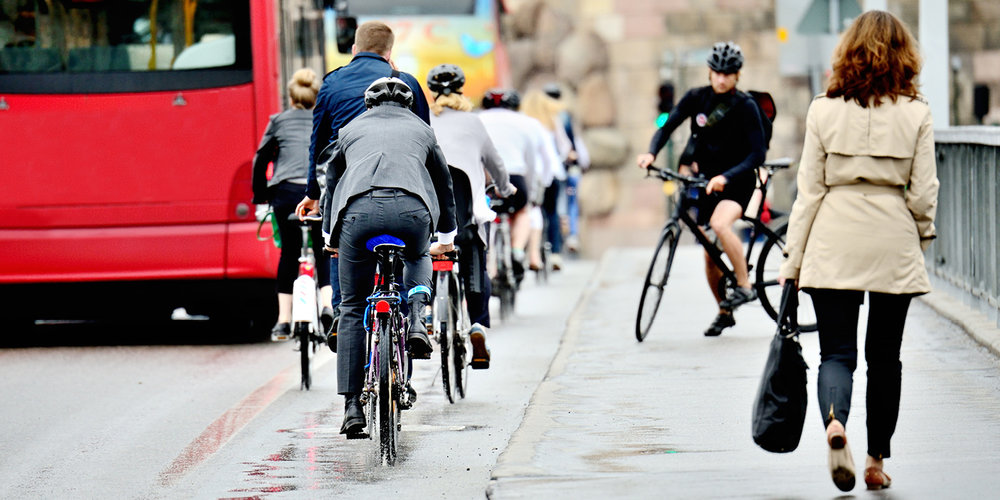 I hate the tube—the heat, the cost, the lack of speed. I’m probably preaching to the converted but, seriously, why on earth do rational adults ever choose to commute using this mode of transportation?

I struggled with the idea of moving to London when I thought that the tube was the only viable way to move around, so I became a cyclist.

Faster, healthier and almost free, I was convinced everyone should cycle. Until I met other cyclists. Using Boris bikes until I could sort out the protracted Cycle to Work scheme, I felt other cyclists saw me as a target to whizz past as closely as possible. Then there are those cyclists who go through red lights—are they nuts? Lycra can do strange things to people.

But nothing compares to pedestrians. Blinder than three blind mice. I’ve nearly been unwittingly run into, slapped and elbowed by pedestrians who decide not to look when they step out into the road. It has become a hobby of mine to watch them completely ignore the road they are crossing. Routinely they don’t stop, look, or listen (to anything except their phone). They only look when I’m almost able to read what’s on their screen.

The longer I live in London, the more I’m convinced the problem isn’t the mode of transport. There are idiots on every one, just waiting to ruin my journey. Be it the light-on-deodorant man sweating profusely on the tube, the red-light-jumping cyclist, or the utterly oblivious pedestrian.

That was the conclusion I’d reached. I felt it was true because I was in the right. But, you see, the rules are that much more flexible when I apply them to me. I self-justify that it’s ok for me to cycle on that bit of pavement because I didn’t cycle too fast, and it’s ok for me to go through that red light because really it was still slightly amber when I sped up…

I’ve found my brain plays a neat trick: whenever I’m in the wrong, I have good and justified reasons. Whenever someone else wrongs me, they are malicious and deserve punishment. I’m always above the arbitrary line that I draw, never below. Funny isn’t it?

But I’ve found this isn’t just a transport-related trick. It’s something that infiltrates every aspect of my life. I have a need to feel superior to others, and do so by judging them to be worse than me. This trait ties in beautifully with my ongoing self-justification. For me, it would be ‘tax-efficient’, but not if it’s those greedy tax-dodging celebrities and corporations. I never leave a mess in the house, I only ever leave something to be tidied up later. If only my housemates would do the same with their mess.

I wonder how many arguments, poisonous workplaces, and broken relationships have been caused because of this trait. If we are always the good guys; if we let ourselves off the hook and yet judge those caught in the same snare, I think we have a problem.

This trait has turned many religious types into acting ‘holier than thou’ because they think they’re better than other people. But it is not just religious people; many of us believe that, if there is a God, he draws a line of morality conveniently below us. And that’s why people so often make claims like, ‘How could God judge me? I’m a good guy’ or ‘at least I’m not as bad as that person’. I’ve met countless religious and non-religious people who think like that.

Jesus was familiar with this trait of the human condition: that everyone sees themselves as above average, from morality to driving [1]. His position was starkly different. Jesus claimed that none of us are good enough, not even the Pope, the Queen or David Beckham. God is perfect and that is the line we all find ourselves underneath.

I’ve found Jesus’ analysis fits my experience of being human. When I’m honest about my self-justification and self-deception, I realise I’m not so good after all. I lie, I cheat, I jump red lights. And if I stop my internal self-justifying marketing programme that tells me I’m a good person even when I hurt others, I hear my own brokenness and I see my own failings. Finally, I understand Jesus’ reasoning: in comparison to a perfect God, I can’t even begin to claim to be good. Even if I stopped at every red light, every time, no matter what.

Right now, you could switch your internal marketing back on and convince yourself you’re not that bad, and hope that Jesus was wrong. Or you could accept your brokenness and respond to his call, ‘It is not the healthy who need a doctor, but the sick. I have not come to call the righteous, but sinners.’ [2]

In other words, the first step to being right with God is admitting you have a problem.

[1] ‘When It Comes To Driving, Most People Think Their Skills are Above Average’, Association for Psychological Science.
[2] The book of Mark, chapter 2, verse 17, The Bible: New International Version.