It is only when we live without touch that we realise how fundamental it is to our existence. In a culture with endless rules governing our physical interactions, how can we reclaim the innocence of touch again? 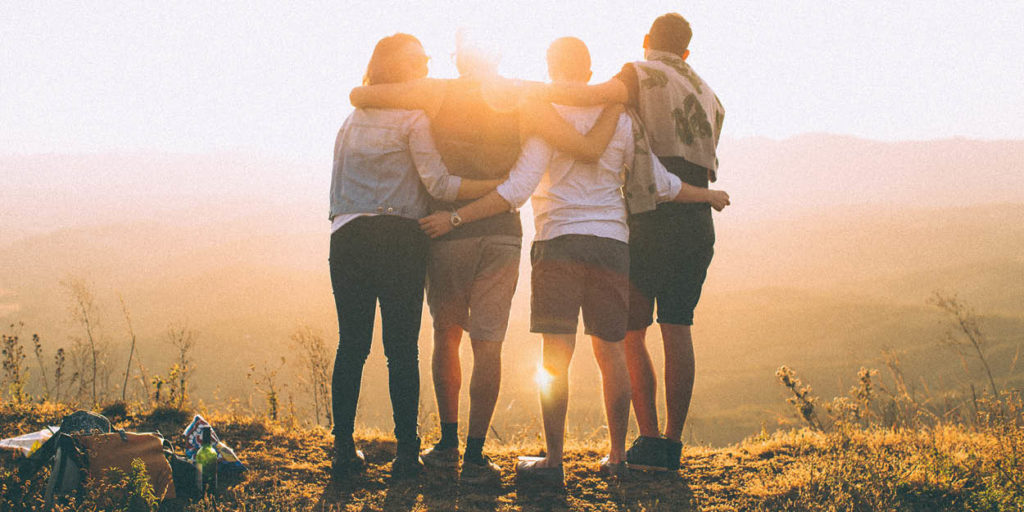 Recently, walking home in the pouring rain, I came across a homeless man shouting at passersby. For some unknown reason (please note, I very rarely do this) I felt compelled to approach him and offered to buy him some coffee and cake. If that makes me sound like a virtue-signalling moron, just wait: what happened next will confirm how much of a snob I am.

As I returned to deposit the items, he introduced himself and put out his extremely dirt-encrusted hand to shake mine. Many very terrible thoughts subsequently went through my head: ‘oh crap, I’m nowhere near a bathroom where I can wash my hands… it looks like he may have some kind of skin disease…is that smell poo? I really don’t want to touch him…THINK OF THE GERMS!’

However, it occurred to me that a tiny gesture of physical contact was probably something this man desperately needed. The smallest thing I could do was to reciprocate with a basic act of civility, so I reached out my hand and touched his. What I then realised in that moment was that I needed to be touched just as much as he did. It felt like we had connected, across the walls of our very different lives, and entered a shared moment of humanity.

As I walked home, feeling thoroughly ashamed of my desperation to get to some soap, I started thinking about how powerful touching another person can be. It’s the first sense we develop, emerging as early as 7 ½ weeks when we are in the womb. It’s linked to a variety of health benefits, including decreased blood pressure, heart rate, and cortisol level. It’s so potent that it can even help premature babies grow: the developmental psychologist Tiffany Field’s 1986 study into physical contact with premature babies found that 10 days of ‘body stroking and passive movements of the limbs’ led babies to grow 47 per cent faster.

Significantly, it is when we are deprived of touch that its benefits are most clearly noted through their absence. It is argued that we are currently living in an epidemic of ‘touch deprivation’ or ‘skin hunger’, contributing significantly to loneliness and mental health crises. At the same time, we are deeply afraid of touch. No-touch policies are being turned out at an alarming rate by institutions, encouraging doctors not to touch patients for fear of legal action, and teachers not to touch their pupils to avoid accusations. Reports even demonstrate that foster parents are scared of hugging kids in their care.

Whilst the desire to safeguard others is a good one, the effects of touch deprivation are serious. Field has also examined the effects of touch deprivation in children, and the results were ‘pervasive, influencing so many bodily systems that kids are diagnosed with “failure to thrive,” resulting in permanent physical and cognitive impairment, smaller stature, and social withdrawal later in life—which often includes aversion to physical contact.’ It is clear that touch deprivation is affecting adults too, as is demonstrated by a recent proliferation in ‘cuddle workshops’ and private sessions with cuddle ‘experts’, which incidentally will set you back around £65 a pop.

The hypersexualisation of touch

This touch deprivation epidemic seems to derive from our tendency to overwhelmingly associate touch with sexuality. This is both a cause and a result of living in the #MeToo era, and the continued debate around what constitutes safe and non-safe touching. As more and more people describe their very negative experiences of touch, this has led to fear and caution around the act of touching another, lest this fall into the category of ‘non-consensual contact’.

Whilst it’s a very good thing that harassment and mistreatment of one another’s bodies has been exposed, our increased attention to it, particularly its negative aspects, does proliferate the idea that touch is inherently a violating act. Francis McGlone, a neuroscience professor, describes our concerning move away from touching one another: ‘We have demonised touch to a level at which it sparks off hysterical responses, it sparks off legislative processes, and this lack of touch is not good for mental health.’ Rules around touch in our institutions and workplaces have ramifications down to the micro level of interpersonal relationships: ‘Anytime you make a rule, you have to think about what’s lost, and what’s lost when touch is forbidden is important’, says David J Linden, a professor and expert on the subject of touch. ‘I think twice about hugging a colleague at work in a way that I didn’t a couple of years ago. I’m thinking, maybe this is going to be misinterpreted. Maybe this is going to make somebody feel bad.’

Yet in denying one another appropriate, respectful touch, we are withholding a gift from them, the gift of acceptance, perhaps even the gift of healing. Cheryl Rainfield, who has written on her own childhood abuse, described the healing qualities of touch that she received from teachers at school:

As an incest and torture survivor who was also bullied at school, I had no safe place—not at home, and not at school. But I had kind, compassionate teachers who knew I’d been abused, and all of them gave me safe touch. It’s part of what kept me from killing myself. I desperately craved safe touch. I was starved for it on a deep soul level. I was never touched except when I was being abused, raped, and tortured, so to get it from these teachers in a safe way—a touch on the arm, a rub on my head, a hug—met such a deep need to be treated with kindness, love, warmth and humanity, and it helped offset some of the abuse, torture, and cruelty.

If touch indeed has such a deep and pervasive power to heal pain, we must reclaim it in our relationships with one another – stranger, work colleague, friend, spouse: all of these relationships must incorporate innocent touch. It was much harder for me to shake that homeless man’s hand than it was to throw money at his problem, but that simple, innocent human touch probably met his needs much more deeply, and for much longer, than a cappuccino and carrot cake did.

The touch of acceptance

In the ancient world, and still in many cultures today, it was understood that to withhold touch from someone was to exclude them from full participation in society (or perhaps that should be the other way around – that a very effective way of excluding someone from society was/is to refuse to touch them). The Dalits in India (literally ‘the untouchables’), lepers, those who were unclean under Jewish law (women during their periods, anyone who touched a dead body)…

Similarly, when we withhold touch in our own culture, we exclude others. We do not offer them the acceptance that comes from being interwoven in community. Touch deprivation is therefore symptomatic of the wider communal breakdown we are experiencing, as our actions are increasingly governed by fear and laws around consent. Skin hunger should be unthinkable in a true community, but the only way we can reclaim our innocence in touch is to be transformed from the inside out – we cannot do it through just making more rules.

In my reluctance to touch the homeless man, I was challenged by the person of Jesus Christ – who offered gentle, loving and healing touch to those who were untouchable. This is one of the ways the Christian God is significantly different from all other deities – he came to earth in bodily form, walked among us, and reached out to touch all who needed it. Moved with compassion, he touched lepers who were outcast from society, putting his own health at risk. He did not flinch when a prostitute kissed his feet and wiped them with her hair – in fact he welcomed her and made her feel accepted for the first time. This was an act that would have been extremely shameful in Jewish culture, and resulted in others making condemning remarks about him.

We are embodied souls, physical and spiritual. Jesus knew that and he knew that we desire, above all, to be accepted. It is through him alone that we can experience any hope of transformation in our relationships. If we are depriving one another of such a basic human desire, we must reconcile ourselves with where things have gone wrong – and how we can ever hope to reclaim the healing power of touch again.

Photo by Helena Lopes on Unsplash