I thought cycling across Europe would make me a hero

This summer Ben cycled further than the Tour De France in six fewer days accompanied by his brother, Jono. But something happened that made him reject his new-found ‘heroic’ crown. 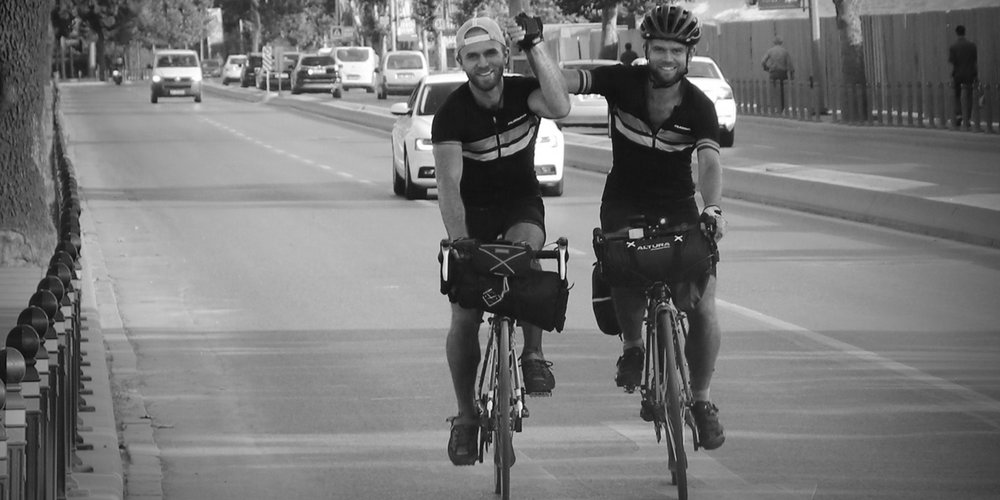 When people hear you’ve just cycled from London to Istanbul in 17 days, the reactions you receive are fairly consistent: ‘Epic!’ ‘Congratulations!’ ‘You hero!’

It’s a natural response—my brother Jono and I cycled further than the Tour De France in six fewer days. But something happened that made me reject my new-found ‘heroic’ crown.

I did it to raise money for charity, and to chase clichés: I sought an adventure that would push me to my limit and show me what I’m made of. I got my adventure, as I honestly didn’t know if we would make it—so many things went wrong. In turn that pushed me to my limit, both mentally and emotionally.

The mental challenge was relentlessly draining. We spent two hours a day sat outside supermarkets consuming an enormous 6,500+ calories. Every other waking hour was focused on bike-related efficiency and barely sleeping in mosquito-infested fields or forests we found by the roadside. Then, for the first ten days, there was the weight of thinking we weren’t going to make it. I thought it was a question of when, not if, we’d fail. That was hard: I’d invested so much energy into it and publicised it heavily. My ego was on the line.

The most enjoyable part of the day was the physical challenge; turning pedals for ten hours a day was pleasant in comparison to the mental struggles. But I thought those ten hours would include heroic struggles, like in the movies. However, the reality of doing something epic was truly mundane. We covered over 200km a day almost exclusively past cornfields, only broken up by lorries whizzing past. Even the fascinating cities we flew through furthered the gap between my heroic expectations and the mundane reality:

That gap left me feeling hollow and wondering why I was doing something so unpleasant with half of my annual leave.

Finally, and most potently, there was the emotional impact of one of our trio dropping out. Losing Luke was a devastating blow, leaving my brother and I to try to find it within ourselves to keep going. Through all of it, I got the clichés I was looking for. I had an adventure that pushed me to my mental and emotional limits, and found out what I made of. The problem was, I didn’t like what I found.

I discovered I was stubborn beyond belief. Admittedly, stubbornness was essential to completing the trip: stubborn people don’t give up. But it also meant I refused to back down. In turn, that led to a few too many arguments with my brother and neglecting anything I needed that didn’t relate to cycling.

I was willing to sacrifice my own wellbeing and relationship with my brother to pursue a goal I was increasingly unsure was worth chasing. So I became joyless. By the end, I could barely bring myself to celebrate finishing. I spent the following five days in one of the most incredible cities on the planet, surrounded by my family, having just completed a monumental achievement—something I didn’t think was possible only a week before finishing. Yet I was miserable. I think I only managed one genuine smile in Istanbul. If this was me in extremis, I didn’t like who I was.

It wasn’t a complete surprise. I’ve long accepted that I’m a flawed human being; it’s part of why I became a Christian. I became convinced my flaws meant I couldn’t make myself right with God—I’d just thought and hoped I wasn’t that flawed. All of this has left me wondering, why on earth do we do this to ourselves?

Endurance events have proliferated over the last decade. But the insatiable desire to achieve doesn’t only happen in lycra. It’s on Instagram, viral in the workplace, and the beating heart behind chasing life’s milestones. I think it comes from an innate desire to prove that you’re distinct, noteworthy and valuable.  But what did my achievement actually achieve? A boastful line on my CV or an unhumble brag? Is that really what life is about?

In the midst of some emotional turmoil on the trip, my Mum said something that is so obvious and yet so much more valuable than my ‘epic’ achievement. She said, ‘No matter what, I love you. Whether you make it or not won’t change that.’

Words like that stick with you. They highlighted how twisted my priorities were. My joyless misery in Istanbul showed me how damaging stubborn achievement-based obsession can be. And I think that’s why I’ve been so indifferent to my ‘success’ and rejected the idea that I am somehow heroic. Love is so much better and doesn’t care about titles and achievements.

I was recently brought to tears by a song that claims God’s love for us rather like my mum’s and isn’t based on achievements. I know God loves me because he was willing to die for me to ensure that my stubborn flaws are no longer a barrier between us. I find security in that because it’s rooted in a historical event. No failure or success of mine can alter something that happened 2,000 years before.

What my epic adventure showed me is that, unlike the shallowness of chasing achievements to boast about on my CV, God’s love is actually worth boasting about because it’s completely secure, can handle my deepest flaws, and is immune to comparison since it’s a love that’s open to all. I hope I remember this now I’m home.