Sometimes it takes car troubles and a small family in rural Tasmania to grasp the meaning and relevance of this thing called ‘grace’. 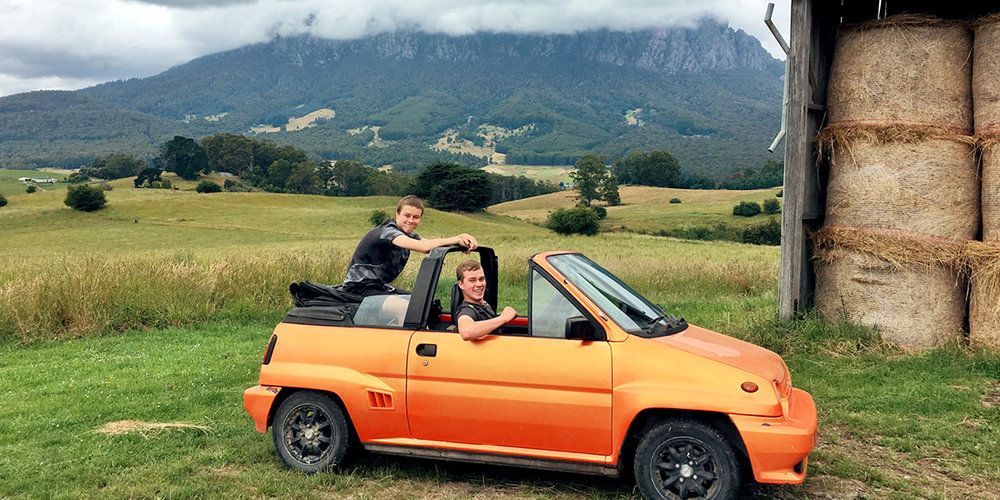 Fresh off the ferry, we woke up giddy to explore a mystical island of windswept eucalypts. The population thinned as we drove inland. On our way up the winding gravel road to Cradle Mountain, customised mailboxes became quirky landmarks in the place of street signs or house numbers. We passed the pink unicorn, the corrugated stork, the giant Dalek… and then my friend’s car — which doubled as our home — jolted to a stop. Waiting for the mobile mechanic on a dusty roadside felt especially sobering after our anticipation had been so high, but later we would look back and marvel: ‘In Tasmania, things go right even when they go wrong.’

We began with doom-laden car troubles and ended up with a surrogate family. Pat was the mechanic assigned to our car, and his family insisted we use their kitchen and bathroom instead of camping while the car was in limbo. Theirs was a humble home with a grandiose view of the mountain, interrupted only by rolling fields, low clouds, and some cows.

They were unabashedly themselves. They opened their home to us completely and never once expected explanation or compensation. They took us spotlighting for wallabies during a midnight rain-shower, skinning and gutting a wild hare Pat shot from an impossible distance. His wife was so sunny and huge-hearted that you’d never guess she was in chronic pain, suffering from lupus. Their two boys were different as can be, but both raised honest and respectful. We took a joyride to their favourite lake and took turns pushing each other in.

I’ll spare you the automotive details; suffice it to say that after two full days of manual labour and a trip to the next town in search of spare parts, Pat discovered that the problem had been caused by an earlier servicing. The previous mechanic’s apprentice had carelessly left a part untethered behind the engine, triggering all the recent malfunctions.

Everyone’s initial reaction was as you’d imagine: Are you kidding me? We felt offended by the lack of diligence, victimised by laziness that cost us time and money we didn’t have. Even if it were an honest mistake, we should still be refunded and covered for the resulting expenses, right?

It was Pat who finally leaned against the bonnet with grease-smudged hands and sighed, ‘Look, let’s give this kid a break.’ We could give his boss a helpful heads-up, but didn’t need to demand reimbursement. If the apprentice was already struggling, losing his job could derail him from any path towards personal responsibility; in a small rural town, adolescence is tough and stability is precious. Instead, Pat would waive the fees for all the extra work he did reversing the damage.

As soon as he said it, it was the most obvious thing in the world and anything less felt inhumane, even un-human. At the same time, it was the most unnatural thing in the world — to wipe a slate clean not just by compassion, but by personal sacrifice. Pat quite literally paid the price for a stranger’s mistake, on behalf of two other strangers he picked up off the side of the road. The apprentice would probably never find out. There were no exchanges to be made or glories to be gained. That’s not just a display of kindness or forgiveness. That’s grace.

It’s an idea that can feel abstract and peripheral even to Christians, whose whole life philosophy supposedly hinges upon the concept. Pat only mentioned his church in passing; he did not proselytise, but his act of grace struck me as an illustration of what the historic life and death of Jesus did for the whole world. In this tiny Tasmanian version, humankind is played by both the lazy apprentice and the broke backpackers — the wrongdoer and the undeserving beneficiaries of a mechanic’s sacrifice.

It was a laughably specific chain of events (and far too many air miles) that led us to experience Pat’s grace, but divine grace is on offer universally, constantly, lavishly. It’s there whether or not we believe we need it, and definitely not because we deserve it; we never could, and that’s the beauty. When I think I’ve thoroughly earned something special, I’m filled with a pride and entitlement that sets me apart, empowering me at the expense of those without. But when I accept something special I know I don’t deserve, I long to extend that bounty to those without, those who are really just like me.

I think Pat understood this deeply, and that his day-to-day decisions were saturated with the resulting overflow of an eternally satisfied and humbled soul. This kind of integrity is not a favour returned, a self-righteous adherence to dogma, a ticket to heaven, or a Karmic tally. It’s an instinctive desire to echo and expose the heart of a loving God that makes no exceptions, source of an ultimate grace that demands nothing but sustains everything.

Sent off with huge hugs and the hare that would become dinner, we sat in our smoothly running car, stirred to the core by this family’s unmerited generosity. The only appropriate (indeed, possible) response was deep gratitude, renewed optimism, and an eagerness to pay forward this goodwill that was never ours to claim in the first place. What would it look and feel like to receive this kind of grace on an infinitely bigger scale, from an omnipotent creator of the universe? What would I look like if ‘my cup runneth over’ [1]? What would the world look like, bursting at its seams?