How did we miss this one?! Oh wait, that’s how. 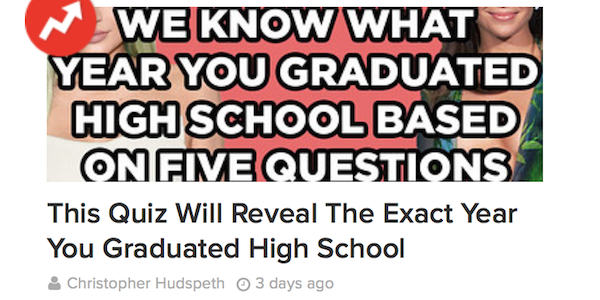 In recent years, the people who run the Internet have perfected the art of turning us into suckers. Most of us are very predictable creatures whose interests can be quantified, manipulated, and converted into cash value by stringing together some choice words:

‘One Short Guy Tried This And He Couldn’t Believe What Happened Next’. Click.

We are invariably disappointed or disgusted when we click through and find ourselves reading about some new way of removing warts, or looking at pictures we wish we could un-see. The trouble is that in the world of Everything Is Sensational, very few things of genuine importance succeed in getting our attention.

As a result, we are easily bored. If it’s old news, or if it doesn’t have a bizarre photo attached, we simply ignore. This is surely one of the main reasons so few people ever take an interest in religion in general, never mind the very important question of who Jesus was. Our attention has been drawn to the superficial; we’ve been clickbaited past what really matters.

Why have we developed this impression? Besides the dreary experiences many have had in churches, inoculating them for life against religion, there is an even more fundamental cause: we have come to the conclusion that Jesus was just a Good Moral Teacher. We say things like this: ‘I think Jesus was great. He taught some profound truths, like not judging, and loving your neighbour. But that doesn’t mean I want to worship him any more than I’d worship Ghandi, Mother Theresa, or Bono’.

Jesus is simply not upworthy any more. He’s too normal. Too nice. Now leave me alone so I can check out these leaked celeb photos.

Is it okay for us to put Jesus in the boring-but-important box and then move on? Many would be surprised to realise that dismissing Jesus as a Good Moral Teacher is the one option we’re not allowed to take. Why not?

The best answer I’ve heard comes from C.S. Lewis (the Narnia guy). Lewis destroyed this idea in what has come to be known as his ‘Trilemma’; he claimed that there are only three possible conclusions that make sense of Jesus. He was either mad, bad, or God. You can’t go for the bland option of Good Moral Teacher because no good person says the stuff Jesus said:

A man who was merely a man and said the sort of things Jesus said would not be a great moral teacher. He would either be a lunatic — on the level with the man who says he is a poached egg — or else he would be the Devil of Hell. You must make your choice. Either this man was, and is, the Son of God, or else a madman or something worse [3].

When Lewis wrote this, he was no doubt thinking of some of the more outrageous claims Jesus made. For example, he said he was the only way to God. He told his disciples they would need to die for his cause. He predicted his own death, but also that he would rise from the dead.

Jesus was a headline-writer’s dream: ‘This Guy Tells The Crowd To Eat His Body And Drink His Blood And You Wouldn’t Believe What Happened Next’ [4].

But he was no sensationalist playing for attention, much less advertising revenue. He backed up what he said by his character, his substance, and (dare I say it) his miracles that won over many hardened skeptics.

This is why C.S. Lewis himself went from atheist to Christian — because, as he put it, Jesus ‘was neither a lunatic nor a fiend: and consequently, however strange or terrifying or unlikely it may seem, I have to accept the view that He was and is God’ [5].

Jesus was not just a moral teacher — a first century Russell Brand or Owen Jones, calling out the Establishment. Instead, his message exploded across the Roman Empire with the speed of a viral K-pop dance, but with a good deal more longevity. Hundreds of people claimed they’d seen him risen from the dead. Nobody has been able to quash this headline ever since.

Jesus looms over history like no one else who’s ever lived. That is simply a statement of fact, which in itself means that he merits sustained attention. Yet, sadly, we are content to remain ignorant of what he said and did. Our intellectual appetite is satisfied on a daily basis by the never-ending churn of sensational clickbait involving sex toys, human tails, and dogs telling the time [6]. No Good Moral Teacher can compete with that.

Anyone is entitled to wrestle with the facts and come to the honest conclusion that Jesus was indeed mad or bad, but we must lay to rest this beige nonsense about him being nothing more than a decent bloke.